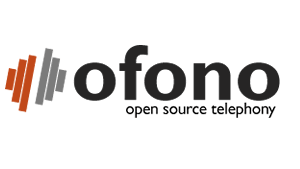 In this article we will show how to extend an IoT Embedded Linux System with a broadband connection using 3G/4G networks.

Poky/Yocto is used as Linux distribution in combination with the mobile telephony application oFono.

As hardware example we have a raspberrypi, nevertheless the same setup was applied and verified on other standard development kits and custom boards. 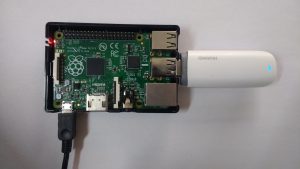 If using a different modem, check first if it’s supported with oFono. Here is a list of supported hardware.

In order to support 3G USB modems, the following kernel configuration options
need to be enabled :

If those options are used, you should see the following in dmesg:

To support oFono, the image recipe should include the following packages:

To allow ofono integration with network manager connman, the following packages can be added:

Connman shall be then enabled with 3g support:

oFono provides a mobile telephony (GSM/UMTS) application framework that includes consistent, minimal, and easy to use complete APIs. It offers a high-level D-Bus API for use and integrate with other applications.

The advantage of using oFono is that very simple to configure and you will not have to deal with any kind of AT commands.

Plug in your 3G modem and check if recognized by oFono:

If SIM card is protected with pin, enter the code:

Depending on the country and Network provider, APN setting is to be configured:

Now the modem can be set online and activated:

Here is an example script of modem initialization:

That’s it! the modem is up and the broadband connection is enabled:

The cellular connection is also available in connman:

we can for example enable cellular connection tethering over wifi:

If having problem to connect with cellular network, you can use list-modem to check the connection status: 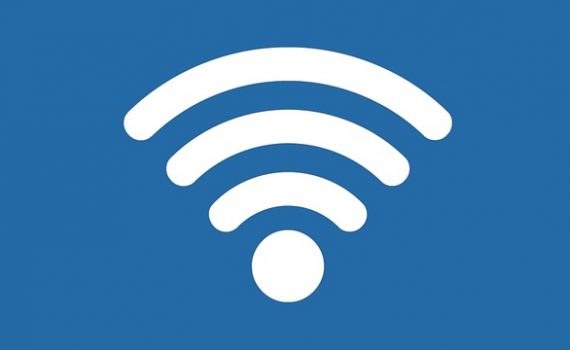 In this tutorial we will show how to setup a guest Wifi hotspot and configure it to restrict the internet access to only web surfing.

We will showcase this setup using Poky/Yocto as Linux distribution and connman as network manager. As hardware we will use:

For both boards we will use a Realtek RTL8192CU based Wifi USB dongle. 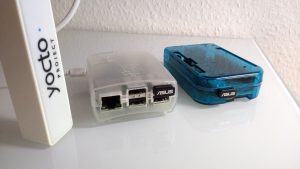 Beaglebone Black machine configuration is already contained in Poky so no need for other layers unless you want to build it for other hardware not supported in those layers.

In order to support tethering, the following kernel configuration options
need to be enabled either as modules (m) or builtin (y):

For routing and statistic support , the following options need to be enabled as modules (m) or builtin (y):

Finally the RTL8192Cu driver option need to be enabled as modules (m) or builtin (y):

You can use kernel fragments to set the configurations above.

Also make sure that ip_tables module is autoloaded by setting in kernel recipe or local.conf:

Your image recipe must include connman and connmanctl packages:

Ready to build an image either for the Bone or the Pi:

Now we can write the output image to an SD card and start the corresponding board to setup tethering in connman.

Plug in a Network cable on Ethernet interface and configure NAT(Network Address Translation):

Finally activate tethering for Wifi using EmbexuSpot as SSID and 12345678 as password:

To restrict guest to browse only internet (No bittorrent, No nasty stuffs) we configure the firewall with the following rules:

This will allow only http/https traffic and drop everything else. 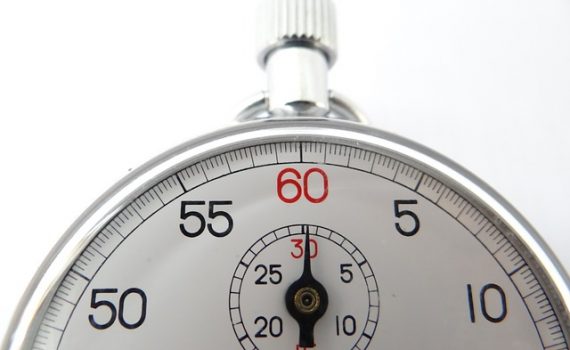 Booting Embedded Linux in One Second !

Booting a device as fast as possible is not only a requirement for time critical applications but also an important facet for improving the usability and user experience.
Most of the Embedded Linux distribution are designed to be generic and flexible to support variety of devices and use cases, therefore the boot-time aspect is not an important focus.
Thanks to its modularity and open source nature it is possible to reduce the boot-time and and achieve some spectacular results just using optimization techniques which does not require any considerable engineering effort.
we will cover in this article an ARM based systems and show a practical example of those tweaks applied to boot a Yocto based Linux on a Beaglebone Black in the blink of an eye:

Before starting any optimizations let’s get a closer look at a typical Embedded Linux boot-up sequence on an ARM processor and analyze how time is spent on each stage : 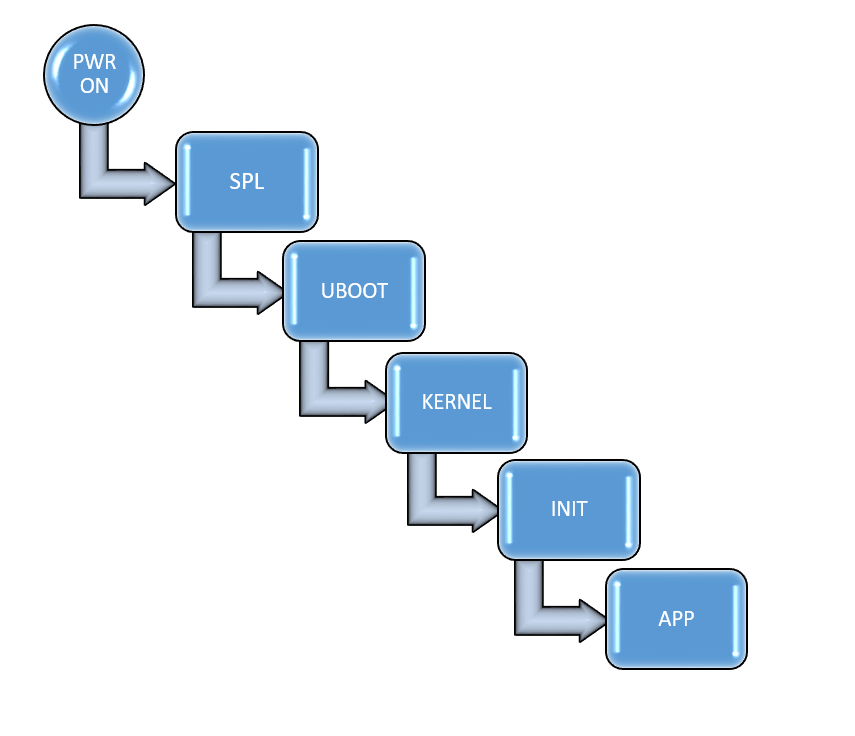 For our example on Beaglebone black the application is an In-vehicle infotainment (IVI) QT5 based connected application and the goal is to reduce the time from Power-On of the device (Cold-Boot) until the application shows up on the display and fully operable by a user.

To measure the time taken by the application to show its availability, we will use grabserial running on a Host (Ubuntu Linux) to measure time-stamps coming from the target on the serial console:

Important to note that grabserial cannot measure from power-on but starts counting time-stamps upon getting the first character on serial console. In the measurement above we set the time base to SPL using -m option.

Our application needed more than 12 seconds to start-up, from special markers present in the serial logs, we can deduce the time spent on each stage:

such time to start an Infotainment system in the car are unacceptable for an impatient end user.

As a recommendation, do not optimize things that reduce the ability to make measurements and hinder implementing further optimizations.

We start then from the last stage of the boot process, by optimizing the user-space and application start-up, then reduce kernel boot-time. Finally optimize the boot-loader(s).

One obvious optimization is to configure the Start of the critical application as soon as possible, of course after starting dependencies. In our case we use Systemd so we change the default target from multi-user to basic and remove dependencies to other services as follow:

As Systemd has an overhead, specially if not running on a multi-core CPU, we can start our application before Systemd initialization by creating a wrapper to init:

and instruct the kernel to use it instead of the default /sbin/init, by adding it to kernel command line:  init=/sbin/preinit

A drawback of this Setup is that your application loses some benefits of Systemd such as auto-restart after crash.

If there are many interdependent processes in play, systemd-analyze can be used to inspect those dependencies and reorder their priorities.

That could be definitely improved by:

Before running the init process, the Kernel needs first to mount the root Filesystem, therefore size and choice of the Filesystem have impact on startup time.

Size matters but in this case a smaller footprint will have less mount time. Here are some tweaks to reduce the footprint of a Yocto based Root Filesystem :

Depending on the storage type an appropriate Filesystem can be used:

In case of eMMC/MMC, EXT3 or EXT4 are widely used but they have an overhead in compared to other Filesystems such as SquashFS (Read-only):

In Yocto this could be easily generated by selecting:

or if using wic kickstart :

The kernel cmdline need to include:

This is an important part of the optimization since a big part of our boot process was spent at this stage.

here are few steps we performed to speed-up kernel loading and execution:

We enabled falcon-mode to bypass u-boot and focused only on optimizing SPL startup: See our Article about how to enable falcon mode

We disabled in SPL all features that are not required for production such as Networking, USB, YModem, Environment, EFI and Filesystems support:

We aslo avoided slow bus initialization such as I2C, for example in the board file we removed the code responsible for board detection using I2C/EEPROM and hard-coded the board type to beaglebone black:

All changes made for SPL can be found here.

Last but not least, hardware settings can have an impact on boot time. For example the Boot Rom may lose precious time by trying to fetch software from wrong media if the bootstrap pins configuration is not correctly set .

On our board, we also noticed that boot up from internal eMMC configured in SLC Mode is a bit faster than default MLC mode configuration, and even faster than using a fast SD-Card(Class 10).

we succeeded in reducing the boot time from 12 second to one second with optimizing different components of the software. The startup time could be further shortened but at cost of the system flexibility.

The Yocto Project is an open source collaboration project that provides templates, tools and methods to help creating a custom Linux-based systems for embedded products regardless of the hardware architecture.

Yocto Project uses Poky as a reference distribution but it can also creates a custom one. The purpose of this article is to show how to create, configure and build an alternative Yocto based embedded Linux Distribution.

Our custom distribution example mydistro extends the basic settings of Poky and uses alternate distro features and configurations such as systemd as init system and ipk as package manager.

A good practice is to isolate the distro configuration into a separate layer meta-mydistro:

First step is to checkout a local copy of the poky project :

Now we can define our distro settings by creating a configuration file:

Settings provided in meta-mydistro/conf/distro/mydistro.conf override similar settings that BitBake finds in the conf/local.conf file in the Build Directory.

To enable meta-mydistro layer we need to add it first to the bblayers.conf :

and fill bblayers.conf.sample with the following:

Then select mydistro as DISTRO either from bitbake or in local.conf :

Finally we are able to build an image using mydistro as distribution: